Stephen was born September 30th 1956 in Wagga Wagga, New South Wales and grew up in Sydney’s southwest. Recalling his early days Steve says,”Summers were hot, winters were cold and kids of my generation actually played outside without fear of being kidnapped, molested or bored.  Without games’ consoles to do it for us, we cultivated imaginations and dreamed of adventure – probably the last generation that ever did”.  Also, I owe my parents everything.”

In February 1975, Stephen applied for, was accepted into and subsequently graduated from class #149 at the New South Wales Police Academy in December of the same year.  On his career as a police officer, he says, “…The discipline and the need to adhere to procedures designed to keep me alive, made me realise that smarter people than I had discovered the best practices I was taught and often they’d learned them the hard way.”  He adds, “by respecting procedure, the outcomes took care of themselves and later I was to learn that this was true in business too ….”

He proudly served nearly 15 years on the front lines before deciding on a career change.

AS A SALES PROFESSIONAL 1989 – PRESENT

Stephen turned to the world of sales and service. He has run highly successful sales teams in the automotive, IT (internationally) and direct sales industries. During this time he studied business at Monash University’s Mt Eliza campus.

On his sales career, Steve recalls;  “A lady I sold a car to once, actually took out an ad in the newspaper to thank me. It cost her $350 to do it and I saw it by chance. I knew I was doing something right.” 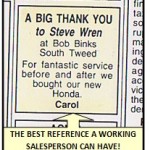 “Whether I was doing something right or whether this kind lady had simply never experienced customer satisfaction, I can’t be sure.  I did learn though that customers are seeking “partners” to consult to (rather than salespeople to sell to them) and when they find one, they stick like glue.  Like any relationship, when there’s chemistry, it stays fresh.”  Tapping into the “chemistry” of sales has been Stephen’s hallmark ever since.

Since 2003, Stephen has been catering to the development of individuals and teams in all sectors of selling and service industries through his partnerships, seminars and lectures.  He describes his forthcoming book, “The Chemistry of Selling” as,  “My legacy to an industry I love so much.    Anyone can learn to program a computer, but to aspire to excellence as a sales or service professional takes so much more…”

Being a coach, as opposed to other forms of teaching, requires the doing as much as the knowing.  Tactical advice therefore must be about what can be done both immediately and repeatedly.  Therories without implementation are redundant and demoralising.

Thoughts & Words
In The Past
Links
Recent Comments